The Boy, the Mole, the Fox and the Horse

Author: Charlie Mackesy
NEW YORK TIMES BESTSELLERWALL STREET JOURNAL BESTSELLERUSA TODAY BESTSELLERFrom the revered British illustrator, a modern fable for all ages that explores life’s universal lessons, featuring 100 color and black-and-white drawings.“What do you want to be when you grow up?” asked the mole.“Kind,” said the boy.Charlie Mackesy offers inspiration and hope in uncertain times in this beautiful book based on his famous quartet of characters. The Boy, the Mole, the Fox, and the Horse explores their unlikely friendship and the poignant, universal lessons they learn together.Radiant with Mackesy’s warmth and gentle wit, The Boy, the Mole, the Fox, and the Horse blends hand-written narrative with dozens of drawings, including some of his best-loved illustrations (including “Help,” which has been shared over one million times) and new, never-before-seen material. A modern classic in ... 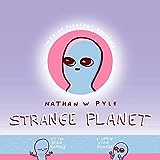 Author: Nathan W. Pyle
#1 NEW YORK TIMES BESTSELLER • #1 WALL STREET JOURNAL BESTSELLER • USA TODAY BESTSELLERStraight from the mind of #1 New York Times bestselling author of NYC Basic Tips and Etiquette and 99 Stories I Could Tell Nathan W. Pyle, Strange Planet is an adorable and profound universe in pink, blue, green, and purple, based on the phenomenally popular Instagram of the same name!Strange Planet covers a full life cycle of the planet’s inhabitants, including milestones such as:The Emergence DayBeing Gains a SiblingThe Being Family Attains a BeastThe Formal Education of a BeingCelebration of Special DaysBeing Begins a VocationThe Beings at HomeHealth Status of a BeingThe Hobbies of a BeingThe Extended Family of the BeingThe Being Reflects on Life While Watching the Planet RotateWith dozens of never-before-seen illustrations in addition to old favorites, this book offers a sweet and hil...

Snug: A Collection of Comics about Dating Your Best Friend

Author: Catana Chetwynd
Why bother getting out of bed when you could stay bundled up with that special someone and a book of cozy, cute comics. From the author of the bestselling Little Moments of Love comes Snug, a collection of comics that perfectly captures the honest, playful, and relatable snapshots of romantic life.Chetwynd’s second book has the same charming and inviting style as her first and includes 50 percent new, never-before-shared comics. Snug is a celebration of the quirks and peculiarities of every one of us—and the magic that happens when we find our matching puzzle piece....

Author: Stjepan Sejic
Dr. Harleen Quinzel has a theory: mental illness is a survival mechanism. As she seeks to help the broken souls of Gotham City piece together their sanity she will become the one thing she fears the most: one of them. A bold new retelling of the tragic origin of Harley Quinn told through the eyes of the only person who knows her better than anyone: Harleen.A young psychiatrist with a potential cure for the madness that haunts Gotham City, Dr. Harleen Quinzel must prove her revolutionary theory to a skeptical establishment by delving into the disturbed minds of Arkham Asylum's deadliest inmates. But the more time she spends with her criminally insane subjects, the closer she is drawn to one patient in particular--and the further she falls away from reality. The birth of legendary antihero Harley Quinn and the shocking origins of her twisted romance with the Joker are revealed in Harleen, ...

Author: Junji Ito
A masterpiece of horror manga, now available in a deluxe hardcover edition!Kurôzu-cho, a small fogbound town on the coast of Japan, is cursed. According to Shuichi Saito, the withdrawn boyfriend of teenager Kirie Goshima, their town is haunted not by a person or being but by a pattern: uzumaki, the spiral, the hypnotic secret shape of the world. It manifests itself in everything from seashells and whirlpools in water to the spiral marks on people's bodies, the insane obsessions of Shuichi's father and the voice from the cochlea in our inner ear. As the madness spreads, the inhabitants of Kurôzu-cho are pulled ever deeper into a whirlpool from which there is no return!...

The Odd 1s Out: The First Sequel

Author: James Rallison
The sequel to the New York Times bestselling The Odd 1s Out, with all new and never-before-seen content featuring opinions, stories, and signature characters from YouTube phenomenon James RallisonJames Rallison has always felt like he was on the outside looking in. His YouTube videos are all about his "odd" behavior, and with over 13 million subscribers and millions more followers on social media, these animations have found their way into the hearts of fans who also feel like a bit of an odd one.In this second installment in the Odd 1s Out series, James is back with characters, stories, and opinions, including: • The upside of the robot uprising • Questionable pizza toppings • Strange yet completely reasonable fears • Inventions that don't exist, but shouldOffering advice on accepting your quirks and growing up in the Internet age, The Odd 1s Out: The Fir...

The Odd 1s Out: How to Be Cool and Other Things I Definitely Learned from Growing Up

Author: James Rallison
Instant New York Times bestseller · Hilarious stories and advice about the ups and downs of growing up, from a popular YouTube artist and storyteller.Like any shy teen turned young adult, YouTube star James Rallison ("The Odd 1s Out") is used to being on the outside looking in. He wasn't partying in high school or winning football games like his older brother. Instead, he posted comics on the Internet. Now, he's ready to share his hard-earned advice from his 21 years of life in the funny, relatable voice his fans love. In this illustrated collection, Rallison tells his own stories of growing up as the "odd one out": in art class with his twin sister (she was more talented), in the middle school locker room, and up to one strange year of college (he dropped out). Each story is filled with the little lessons he picked up along the way, serious and otherwise, like: * How to be co...

Hilo Book 6: All the Pieces Fit

Author: Judd Winick
"An action-packed page turner with heart!"--Dav Pilkey, author of DOGMANFor five books, Razorwark has chased Hilo through the Universe. Now the chase is over. Find out how the epic war between Razorwark and Hilo ends and get ready to start the next adventure with the New York Times BESTSELLING GRAPHIC NOVEL SERIES that kids and critics love!Being a hero isn't easy. But Hilo had no idea it would be this hard. Hilo came to earth because he was running from Razorwark. But he's done running. Razorwark has come to earth. And the time has come for one final face to face showdown. What happens will decide the fate of the robot world . . . and Hilo's future. The sacrifice will be great. But with Izzy's help, Hilo finally knows what he has to do. Because THIS is how all the pieces fit.Here's what people (and robots!) are saying about Hilo!"Every kid would love a pal like Hilo, and every kid will ...

Author: Robert Kirkman
The New York Times bestselling, Eisner Award winning THE WALKING DEAD series takes readers on the harrowing journey of Rick Grimes returns with its FOURTH massive paperback collection! With over 1,000 pages, this volume contains the final chapter in Robert Kirkman (Super Dinosaur, Oblivion Song, Invincible) and Charlie Adlard's Eisner Award-winning story of survival horror upon which the hit AMC television series is based.From the Whisperers to the Commonwealth, Rick Grimes meets new allies and enemies to the way to reclaiming the world from the dead. Wars are started, and dear friends fall... Collects THE WALKING DEAD #145-193....