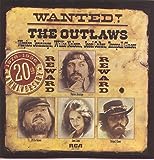 Manufacturer: Sony Legacy
Product Details
Reviews / Wanted! The Outlaws (1976-1996 20th Anniversary)
Reissue of the mid-'70s outlaw country classic featuring Willie Nelson, Waylon Jennings, Jessi Colter and Tompall Glaser, with original artwork, liner notes (from Chet Flippo) and nine "lost" tracks!
Less successful when it's sentimental (Waylon Jennings' "My Heroes Have Always Been Cowboys") than when it's wry (Willie Nelson's myth-puncturing "Me and Paul"), this cash-in compilation of previously released cuts was just in time to grab the first platinum record ever awarded a country album. It's not bad, but both Jennings' contemporaneous Dreaming My Dreams and Nelson's Red Headed Stranger are more nuanced tastes of the good-bad-but-not-evil-ol'-boy lifestyle. (Not to mention much of Tompall Glaser's own Outlaw compilation.) This 1996 CD reissue adds nine more tracks from the era as well as a new Jennings-and-Nelson version of Steve Earle's "Nowhere Road." --Rickey Wright